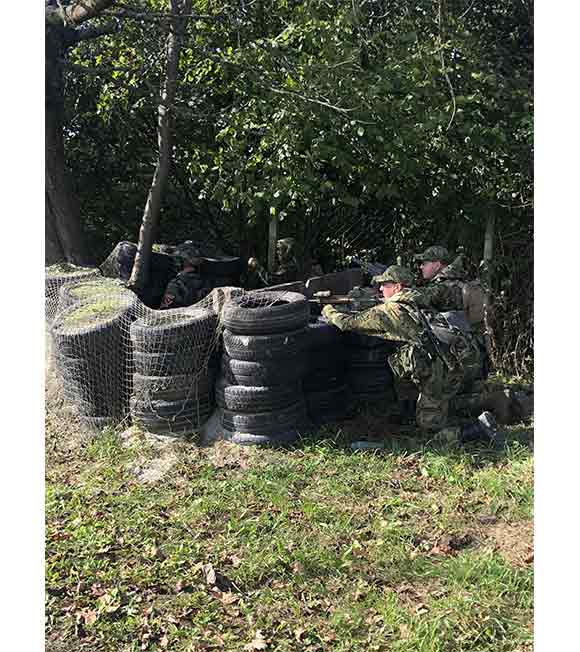 Airsoft is a competitive team shooting sport in which participants eliminate opposing players by tagging them out of play with spherical plastic projectiles launched via replica air weapons called airsoft guns.

Although very similar to paintball in concept and gameplay, airsoft pellets do not typically leave visible markings on their target, and hits are not always apparent. Though the pellets can sometimes leave red contusions or “welts” on exposed skin, the game relies heavily on an honor system in which the player who has been hit is ethically obliged to call themselves out.

The airsoft guns used are mostly magazine-fed, with some having manual/battery-powered spring-piston pump powerplants similar to Nerf Blasters, or pneumatically powered by replaceable compressed gas (e.g. propane (“green gas”), 1,1,1,2-tetrafluoroethane or CO2) canisters. Many airsoft guns also have mounting platforms compatible with genuine firearm accessories, and cosmetically more resembling real firearms. This makes them popular for military simulation and historical reenactments. There are also professional gun safety and weapon manipulation trainings conducted with airsoft in some fields, such as law enforcement trainings, due to better safety and lower cost. The United States Coast Guard, for instance, has officially adopted airsoft for training in 2018.

Airsoft gameplay varies in style and composition, but often ranges from action shooting to short organized live action role-playing (LARP) scenarios, close quarters battle skirmishes, military simulations (MilSim) or historical reenactments. It is played in indoor courses or outdoor fields. Combat situations on the field may involve the use of genuine military tactics to achieve objectives set in each game. Participants may attempt to emulate the tactical equipment and accessories used by modern military and police organizations. A game is normally kept safe by trained professionals acting as supervisors and umpires. Before gameplay, an airsoft gun’s muzzle velocity is usually checked through a chronograph and usually measured in feet per second (FPS). Some countries have a set velocity or muzzle energy restriction; guns shooting over the legal velocity can be confiscated. Some playing fields further restrict minimum engagement distances,[8] requiring players to yell “Bang Bang!” or another phrase instead of shooting other players at close distances. This is done to prevent possible injuries from short range, high energy pellets.

Previous: The history of airsoft
Next: Airsoft guns