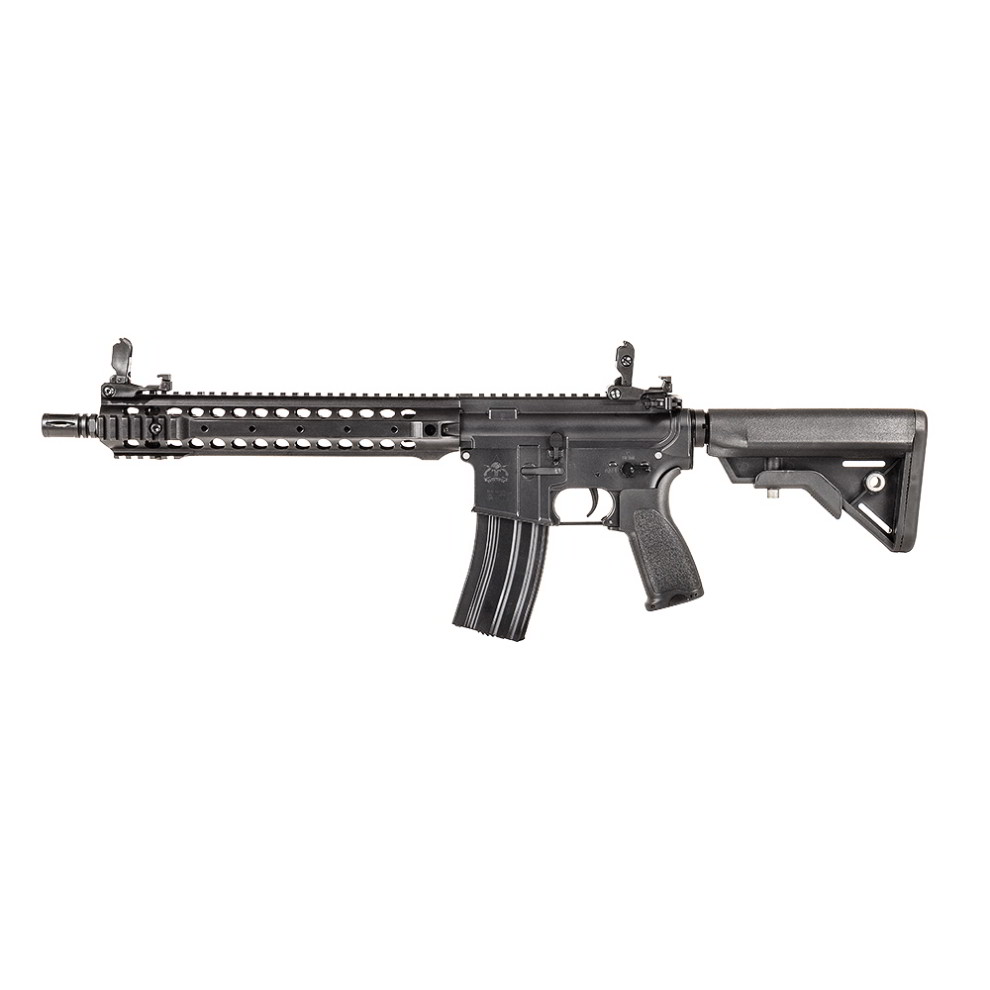 The guns used in airsoft are typically classified as imitation firearms. They have a mechanism for shooting projectiles 6 mm in diameter.

Airsoft guns are classified according to their operating principle, which can be spring-loaded, electric (battery-powered Automatic Electric Guns, Airsoft Electric Guns or “AEGs”), or gas-powered (if these have a blowback feature they are known as “GBBs”). Some companies produce full replicas of counterpart grenade launchers which fire a projectile spray of 6 millimetres (0.24 in) pellets by use of a high-powered spring mechanism or a compressed gas propellant (i.e. green gas, propane, compressed air, or CO2). There is also a type of airsoft gun that is powered by a single (HPA) high-pressure air tank and a battery pack to power the internal FCU “Fire Control Unit” computer board. These guns are often known for their high and adjustable ROF or “rate of fire” and durability. These HPA replicas are most often referred to as “PolarStars”, although this refers to a popular brand of HPA engines and accessories.

A typical airsoft gun is noticeably lighter than its “real steel” counterpart due to the use of aluminium alloy and plastic materials, though some have added weights in them for a more realistic feel. Japan has specific rules about producing airsoft guns with metal parts, while newer guns, especially those made in Taiwan and Mainland China, have both internal and external parts that are metallic. Smoke caps, as well as noise amplifiers, are available for certain airsoft guns to add realism.

Gas handgun magazines usually contain 10 to 30 pellets in a standard-capacity magazine; however, some are high-capacity magazines and can hold 50 rounds or more. In the case of AEG rifles, magazines come in either real-capacity (equivalent to the 30-round capacity of its real steel counterpart), low-capacity (10-50 rounds), mid-capacity (75-160 rounds) or high-capacity (190+ rounds). These magazines have spring followers like in BB guns. The high-cap magazines often have a ratchet wheel that can be wound up periodically to force pellets up from the holding chamber of the magazine to the feeding chute. Due to loose pellets in the reservoir, they often make a rattling noise when running or walking. Some airsoft guns have a battery-powered box or drum magazine that holds thousands of pellets, but these are usually only used and allowed on LMGs (light machine gun) type replicas.

It is common for owners to “tech” (modify) their guns. The majority of gearboxes are made to Tokyo Marui specifications and have aftermarket upgrade parts available commercially. Some gearboxes are proprietary in design. It is also possible to perform DIY modifications.

Airsoft guns shoot plastic pellets at velocities from 30 m/s (98 ft/s) for a low-end spring pistol, to 200 m/s (660 ft/s) for heavily upgraded customized sniper rifles. Most non-upgraded AEGs are in the middle, producing velocities from 90 m/s (300 ft/s) to 120 m/s (390 ft/s). The internal components of most guns can be upgraded which can increase the pellet velocity significantly. Using heavier pellets (.25 g, .3 g, etc.) will significantly reduce the gun’s muzzle velocity, but can increase accuracy at range and reduce susceptibility to wind drift. Lighter pellets have less kinetic energy than their heavier pellets, despite their higher exit velocity. Decreasing the pellet’s weight does not generally increase its range.

A common upgrade done by players is in the “hop-up” system, featured in most mid- to high-end AEG’s, as well as gas guns and spring sniper rifles. In this system, the wall of a rubber tube, called a bucking, is forced into the upper path of the pellet right before it begins flying down the inner barrel. This contact imparts backspin, which in turn gives the pellet a Magnus lift to maintain a flatter trajectory for a longer period of time. This is adjusted by screws or gears that cause the bucking to only show a small or large presence in the barrel. Different degrees of firmness of the rubber are considered when a hop-up is being upgraded.

Even though in certain countries lasers are illegal, they are popular attachments in the U.S. and Europe. Laser sights are more for their appearance than any practical effect, largely because they must be weak enough not to carry a risk of damaging another player’s eyesight, which rules out using any laser powerful enough to produce a visible dot on the target in sunlight (although lasers can be useful for night games). Also available are “mock suppressors/silencers”. These resemble the actual firearm accessory that dampens sound. Since Airsoft does not use combustibles for propulsion these usually serve no function. Although there are models that function to “light up” a glow-in-the-dark BB using UV light similar to a tracer round.

Previous: What is Airsoft?